It's hard to believe, but there are still people out there who don't yet know about the cute little critters that inspired my work. 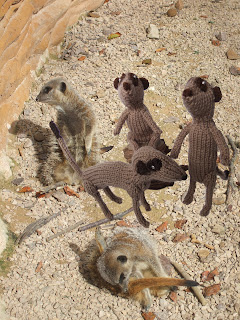 My readers are all highly intelligent people, so I won't need to tell you that some of the meerkats pictured are real live animals, some are knitted by me.

My meerkat mania started when I discovered a television series called Meerkat Manor. There are lots of clips on youtube, but here's just one to give you a flavour.

In a "normal" episode there is no human interaction, so for a while I thought meerkats were much bigger than they really are. The commentary is very anthropomorphic which gets in the way slightly at times. I've been overheard muttering "But is she *REALLY* worried? Has she told you?"

They're very social little creatures, with designated "baby sitters" and "sentries" when they're out foraging. Meerkats make a tasty treat for predators, so they need to keep a sharp look out for carnivores both on the ground and in the air. I particularly like the pose they strike, standing tall and staring at the sky - so that's why many of my meerkats are gazing upwards. 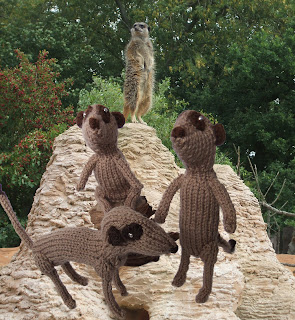 Incidentally, I took these photos at Whipsnade zoo. There is a nearby gliding school, so gliders pass overhead frequently, causing the meerkats to make their "alarm calls"! One of the facts I picked up from Meerkat Manor is that there are distinct calls, so when the alarm is given by a sentry the mob knows instantly whether it's signalling "Danger from the air" or "Danger from the ground". ("Mob" is the collective noun for a group of meerkats)

So - there I was one day, watching Meerkat Manor, when suddenly I said to myself "I could knit one of those." I hunted in my stash for some suitable meerkat-coloured yarn, but there was only a small ball. And that, dear readers, is why my meerkats started out quite small. The first design, the little seated meerkat, is only 5 inches tall (13cm). 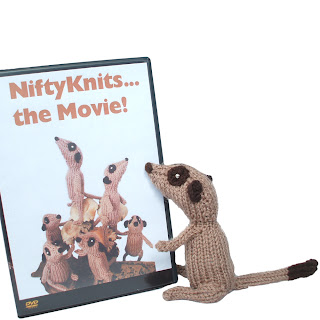 I knew I wanted them to stand up, but I just couldn't work out how at first. I slept on it - and woke up with the secret! 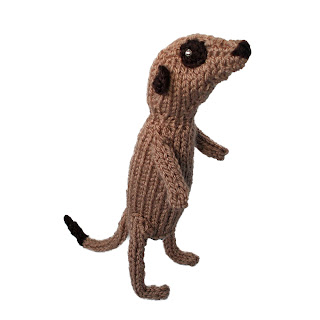 After the standing meerkat I decided to make some larger versions... 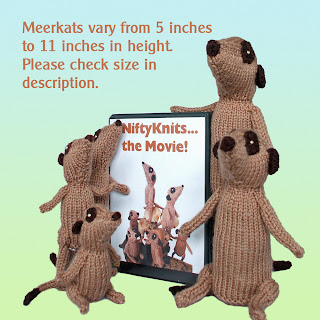 More recently, I added some "all fours" meerkats. I am particularly pleased that their spines can flex, meerkats when running curve their spines up and down quite alarmingly! 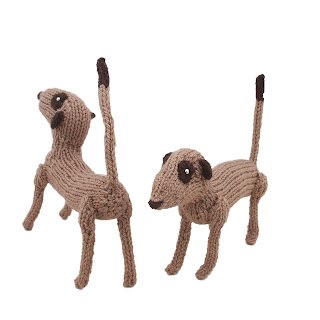 Quite early in my meerkat-knitting-career someone suggested I put them in clothes - and I laughed, and said no! I still love my natural meerkats... 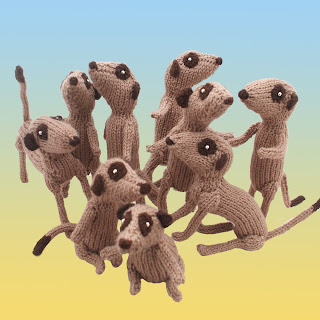 ...but my creativity blossomed when I realised that actually, they look pretty cute dressed up. It also meant I had the perfect excuse to spend my days sitting on the sofa, knitting and watching Star Trek - it's research! 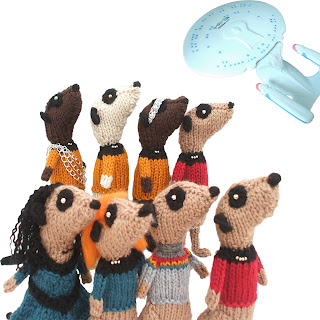 All meerkats shown (and many more!) available from my online stores. If the meerkat you're looking for isn't in the store of your choice, just ask.

And as always - if you have an idea for a new meerkat, please let me know! Get in touch here