My name is Heather - pleased to meet you!

I used to be a teacher but lesson plans are nowhere near as much fun as designing and knitting meerkats, so I left the classroom behind a few years ago. The inner child now gets to play with yarn each day and conduct “research”…also known as watching TV for characters to make into meerkats!

Some of those meerkats have taken it full circle, and have actually appeared on TV themselves! The first was Harry Hill Meerkat, he was a finalist on Harry Hill's TV Burp in 2010 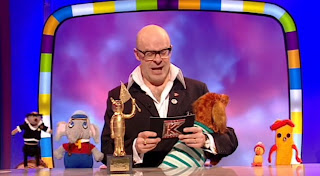 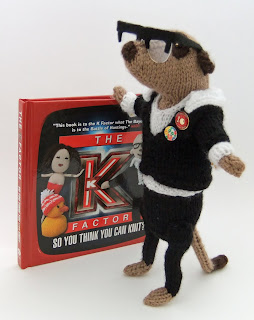 As a result, I was commissioned to make meerkats of the Meridian TV presenters, seen here with their lookalikes! 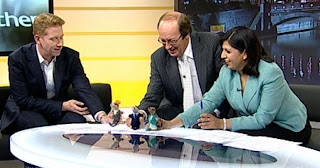 Everything in my shops is designed and knitted by myself in the clean, fresh, seaside air in Kent, the Garden of England (no cigarette, perfume or pet odors and no slaves to help me knit). You name it, I'll knit it. "Knit to Order" currently ready to ship in a week, often less.

I don't *only* knit meerkats, but let's face it - they're what my buyers most desire!

Each meerkat has my brand label sewn to it (generally on its tiny bottom) and comes with a signed and dated certificate of authenticity.

My virtual mob (that’s the collective noun for a bunch of meerkats) are always suggesting new characters for me to knit, you’re very welcome to join in! I’m on facebook http://www.facebook.com/NiftyKnits.co.uk and on twitter http://twitter.com/NiftyKnits

I like to walk by the sea each day, and ramble in a random manner on my blog too – I don’t like to thrust my work at you too often, so I also write about my wanderings, the seaside, my family – whatever floats to the surface really! Lately I've been sent various (free) products to review (thank you!) but I can promise you that the reviews are what I really do think.

You'll have noticed a distinct lack of photos of me. You don't want to see the real me, do you?

Oh well, if you insist! I bought new clothes specially, just in case Harry Hill Meerkat won and we were on screen. It was not to be - but at least I got a hug from the star of the show at the wrap party! 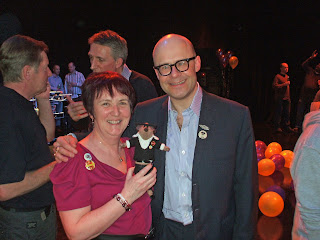