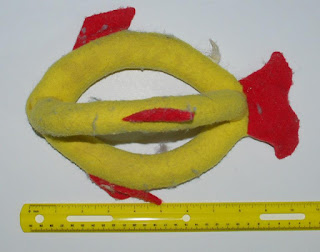 This is the photo that started my sewing adventure, many thanks to FosterDadJohn from the Critter Room for permission to use it, and of course don't miss the FosterKittenCam where you can see the original ChickenFish and find out why we say "HAIL!" :-)

You may have noticed some time has gone by since part !! There has been considerable scratching of head and much advice sought and given by people who are so much more experienced at sewing than I am. A big thank you is owing to MinervaCrafts.com who supplied my materials.

(Please note this is not a pattern as such, not yet, more an exploration of my sewing learning curve! the pattern will come later, and will be free to use with the suggestion that you help support the kitten cam by donating to PurrfectPals)

Jackie suggested trying gathering the fabric rather than the mass of tucks I'd tried last time, so I gave that a go: 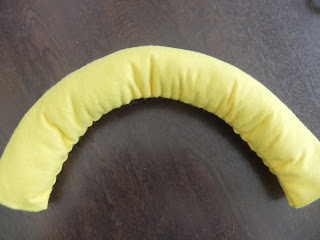 The felt is quite thick though, so was too puckered. Worth a try though!

My reason for trying to shape a rectangle rather than just cut out "rainbow shapes from the start was to save fabric, but Janine Basil asked me "Is the saved amount of fabric worth the amount of time taken to mark out and sew all the darts?" Oh so very true!

Back to my scrap fabric... 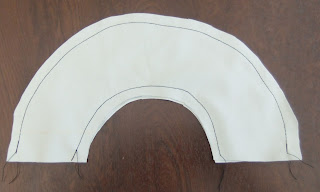 Here are the two together. No puckering, which is good, but somehow the arch has become too tight, and I could see that the "feet" need attention. 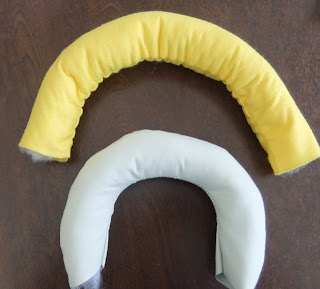 I cut my template in half and stretched it out a bit to give a wider arch, and also trimmed the ends to get a better angle. (Don't tell anyone, but I didn't think of this when I made the first one...) 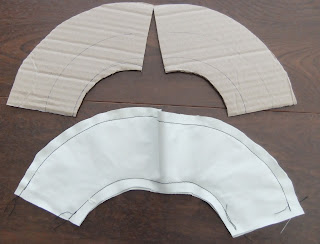 So - on to the fins and tail. I cut a template for the fin and then doubled it with an extra seam allowance in the middle to allow me to sew it inside the seam. 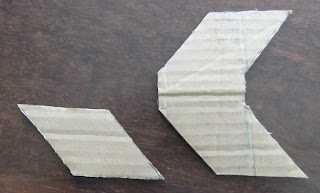 I wanted the fins to be sturdy so I decided to add wadding between the two layers of felt. 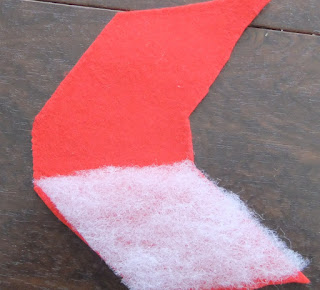 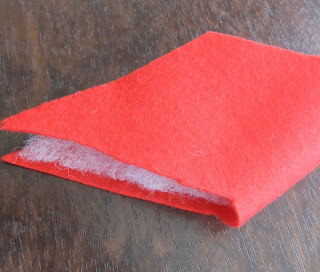 Felt doesn't fray, so no side seams - I just zigzagged along the edges. Feeling confident so added extra top stitching detail! 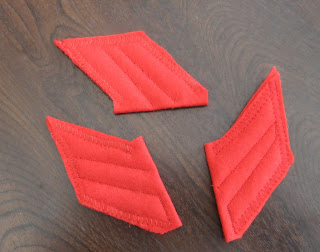 Yay we have fins! I cut my arch shapes from the rectangles that hadn't worked out, economical to the end! The scribbled bits at each end are my afterthoughts, these needed trimming.

This was where it got complicated. I needed to make sure the fins were in the right place, and facing in the correct direction. The top fin is in the middle, the side fins are nearer the front - and need to match! I laid it in place, right side out, first (you can see where the seam allowance on the fin will slip inside the main seam). 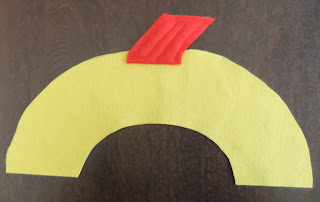 Turned it down, ready to put on the top arch 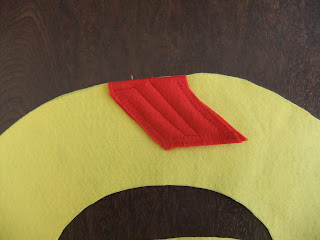 Ready to pin and stitch. I sewed the top edge first so that I could turn it out and check. 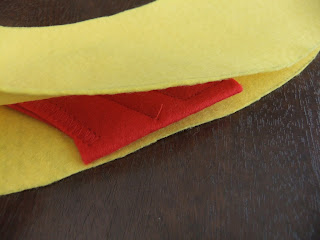 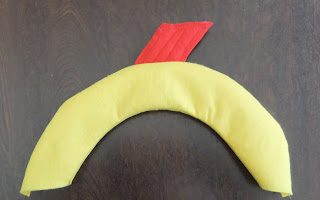 After stuffing I could see that I was getting there! 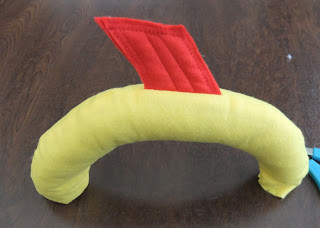 Because felt doesn't fray I could have just oversewn the two sections together, but I thought that tucking in a seam allowance would be more secure. I was keen to keep the stuffing on the inside, and you know how sneaky little claws can be! I stitched the two sides together first, just at the back end. 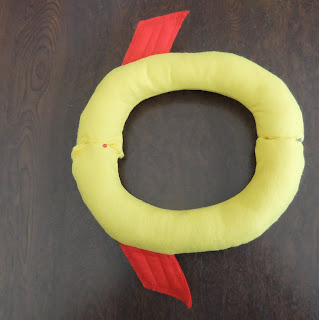 I couldn't resist holding the other piece in place! 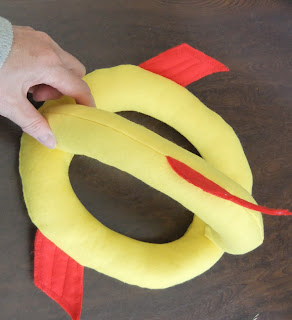 I wanted to make the tail really secure, so stitched it in stages. I cut it double on the fold like the fins, but no middle seam allowance this time. I cut some wadding to pad it out. 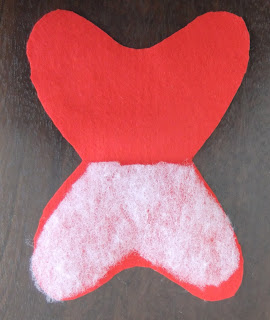 I lined up the middle of the tail along the seam at the back, making sure I matched the midpoints, then backstitched backwards and forwards, paying extra attention to each edge. 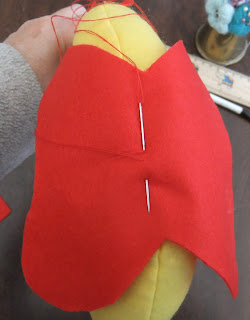 I put the wadding in the middle and pinned both edges together. 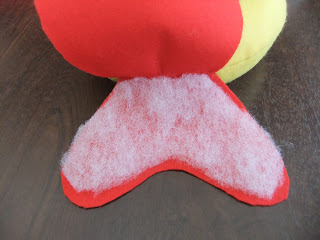 I then zigzagged the edges as with the fins. I couldn't get right to the edges as the main part was already stuffed, so finished off by handstitching. You might like to stuff later, then the machining would be simpler. I didn't think of that! 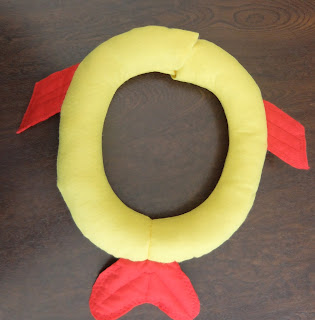 Finally, it's time to stitch the front end in the same way as the back, then add the top. I was more concerned with making it cat-secure than with beautiful stitches and kept tugging the seam and putting in extra stitches wherever I saw a gap. 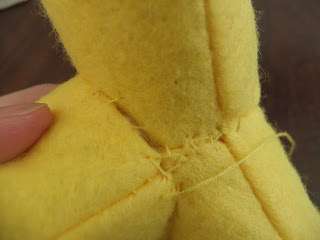 Eyes came next. I chose to make mine from felt circles, black on white, and stitched them in place.

And finally - to sit and guard my screen and admire the real-life counterpart! HAIL! 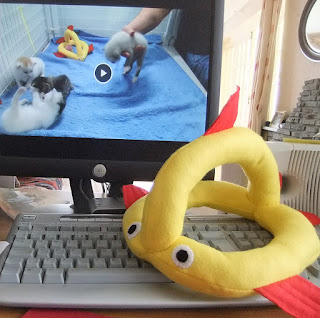 I will be writing another post with a pattern, but for now I hope you enjoyed my sewing journey!

I'd like to thank several people for helping with ideas, all have online shops that are well worth a peak!

HJDcrafts who even drew up a cutting plan for me!

SeeTheWoods accessories and cases for everything

and last but definitely not least MinervaCrafts.com who very kindly supplied the materials for this project. Their online store has grown even while I've been sewing, and they were helpful enough to pick out the matching thread for me when I couldn't decide which was best (it was 202)

I used 18" wide Plain Acrylic Craft Felt Fabric in Yellow (My 2.5 metre roll has made two chickenfish so far and have enough remaining for another two.)

The wadding came from my stash but I think Minerva's lightest weight wadding would be fine.

Black and white felt also came from my stash, as did the toy filling. I used a carrier bag full.

Aha! I see now. yes I agree the gathers puckered it a bit too much. I hadn't realised it was in felt. By the way I have discovered a wonderful fabric glue which would save the sewing on the eyeballs. Guterman HT will even stick metal to fabric.