One sock finished, one to go! 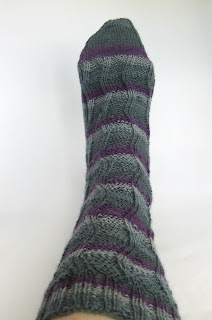 This has very much been a case of sockus interruptus, I had to abandon sock knitting several times to knit a pair of wedded meerkats for a customer, a chick for my daughter and an anatomical heart for my daughter-in-law! One sock is finally finished however, and I'm pleased with the result!

I used a pattern from a book I was sent to review, Socks a la carte. I really like the wriggly lines in the pseudo cable. Looking back I see I promised you an update on April 27th (oops!)

The yarn, as you can see, is a self-striping yarn. It's called Aviemore, it's 75% wool and 25% nylon so should be hard-wearing and easy to wash. Hope so, I don't believe in handwashing, life is too short.
It's not the yarn recommended by the pattern so I was a little nervous but I weighed the leftovers after one sock and I have plenty more than half a ball to go.

I haven't used self-striping yarn before, so didn't think through how I would make the two socks match until rather too late... 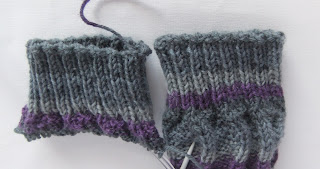 Now, many people might find this adds to the charm, but I just know I would be trying to line up the stripes every time I wear them. It wasn't entirely easy to find where to start the second sock. The yarn has three shades of graduated grey and just one of purple, so if I was to start again from scratch I would definitely make sure I started at the beginning of the purple, much easier to locate. As it was, I needed to find partway through dark grey! *sigh* 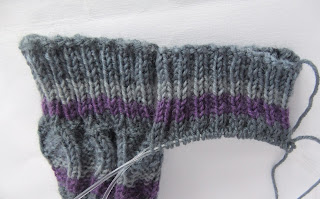 Looking good now though. I've noticed the stripes aren't always the same width, so whether it'll still match by the time the second sock is finished is another matter - I'll keep you posted! To be honest though, I don't think my socks are a matter of national importance.

Thanks to Abakhan.co.uk for supplying my yarn, needles and accessories as part of their creative blogger challenge!

Fab. Socks are my new obsession, making some for a friend's birthday on the bank holiday. I'm not going to worry too much about the stripes though!