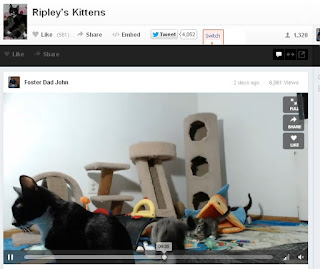 Each day MrNifty and I have to have our kitten fix on livestream, all the way from America. John fosters kittens for Purrfect Pals and streams video 24/7. Kitty bliss!

One of the kitten's favourite toys is chickenfish, you can just about spot it in the middle of the screen - and I have knitted a tiny version to hang on a keychain.

I'm posting the pattern I designed free for your personal use, but I'd ask that you don't make them to sell unless you donate the profits to Purrfect Pals, the charity John fosters for.

Before I get to the pattern: I used double strands of DK wool simply because I have lots of it in my stash. If you choose to use a single strand of thicker yarn, that will work fine. My patterns aren't rocket science, try it and see what works for you. I used smallish needles and thick yarn to get a fairly solid piece of knit so that it will "stand up" by itself. Using single strand DK will result in a floppy fish.

You'll need a small amount of yellow DK yarn (light worsted weight), an even smaller amount of red DK yarn, a pair of double pointed needles (3.25mm, UK 10, US 3), a keychain and a pair of googly eyes. The yellow part is knitted as i-cord, there are lots of tutorials online if you're not sure how to do this. 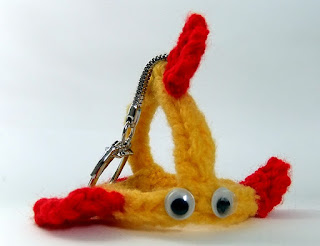 Using TWO STRANDS of yellow DK yarn, cast on 3 stitches (leave a few inches of yarn for sewing up later) and knit i-cord for 10 inches (25cm). Cut yarn, leaving about 6 inches or so and pull through.

Now for the fiddly bit! Fiddle with your yellow tube until you've got it into chickenfish shape - basically 2 thirds will be the bottom loop, with the last third going from tail to nose. Use your yarn ends to sew in position, you may need a few extra stitches to "tweak" the shape at either end. Don't cut off the yarn yet, you'll need it to sew on the keychain. 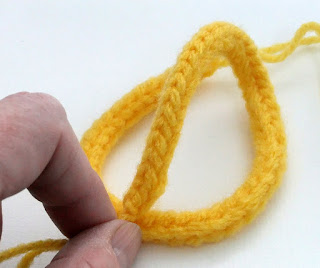 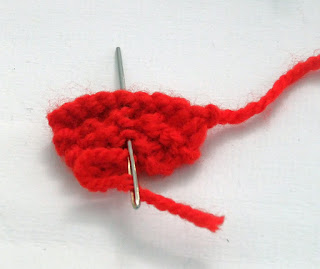 The tail should be fan shaped at the moment. Take one of your ends of yarn and stitch through the middle and pull tight, this will give a better "fishtail" shape - then stitch to whichever end you have decided looks most like the bottom!

Stick the googly eyes either side of the other end with superglue, or embroider eyes if you prefer. Craft glue probably won't do the job, it's not easy to persuade knitted yarn to stick!

Stitch the fins on either side and at the top - and then decide where you want to attach your keychain. I tried two positions:  between the eyes, and just behind the top fin. It's up to you. 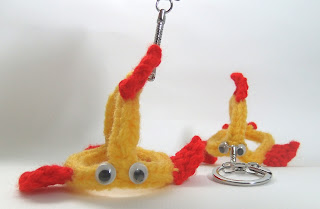 Now I know some of you won't want to wait...so if you would like one of the two I've knitted, I've listed them in my Etsy shop here. I promise to donate £5 from each purchase price to Purrfect Pals.

oh...and before I go, if you're here before February 9th, don't forget to enter my giveaway here!!

Posted by Heather Leavers at 16:00

These are adorable! I hope you plan to make more - I don't knit, so I'd love to have one!

HAIL!
Thank you for posting the pattern. LOVE IT!!!