Oh I do so enjoy a challenge! Abakhan challenged me (and other creative bloggers) to spend £15 in their online supplies shop abakhan.co.uk and share the results. I went straight to the knitting section and just look what I spotted in "other": I chose the black/red floral version but there are lots of others, even animal prints! 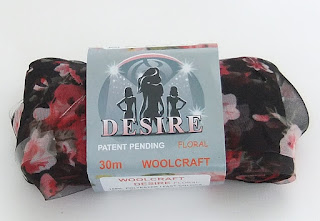 I have to say I think they need to get more creative with the section heading, "other" just doesn't do it justice. The line of knitting "yarn" is seriously bizarre and was in my virtual basket in seconds, it comes in a range of colours and patterns but this one spoke to me and I knew what I'd be making before it arrived... 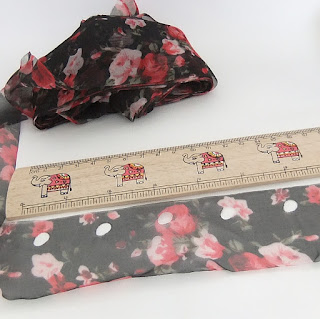 It's not really yarn at all, it's a thin strip of chiffon fabric with holes punched regularly along the length. Abakhan link to another website with instructions on how to knit with it, there are also diagrams on the ball band. Basically, instead of winding the yarn around your needle to knit a stitch you slip the needle through the next hole - easiest to understand by looking at the video Desire Fabric Yarn video tutorial  (she doesn't start knitting until 2min10sec so you might want to whoosh straight to that point)

Looking at the fabric just one strip thick, it's quite translucent. However, it knits in rippling layers so that soon changes.

As you see, the suggestion is 4 mm - 5mm needles. I grabbed both from my stash but after starting to knit realised it doesn't actually matter. Usually a bigger needle results in bigger stitches and looser weave, but of course with this fabric yarn you're going to poke the needle into the holes in the fabric which will always be the same size. I chose to carry on with my 4mm needles because they were shorter and therefore more comfortable on so few stitches.

After knitting a couple of rows I decided to switch needles again. The 4mm needles were plastic and quite sharp. I unravelled what I'd knitted so far and several of the holes were starting to fray. This is not very forgiving yarn! Best to use smooth blunt needles if you have them, and try to be sure what you're going to make from the start! 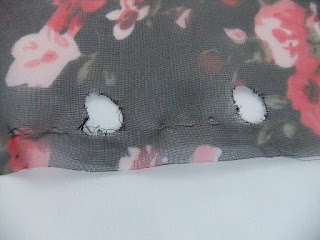 At this point I also discovered the yarn was not one continuous strip as I'd expected. I hope the break isn't going to show, but I'm surprised. (edited to add - there was only one break)

Back to work - this is going to be one VERY fancily dressed meerkat!

I'm finding the yarn is twisting around on itself as I knit, so I suspect I should have started using it from the middle, rather than the outside of the skein as shown on the video tutorial. I also discovered (too late of course!) that it is really easy to see if you have enough length left for a final row: all you need to do is count the holes remaining in the strip. Next time I'll do that slightly earlier :-)

My intended design needed some fancy feathers, so I chose these: 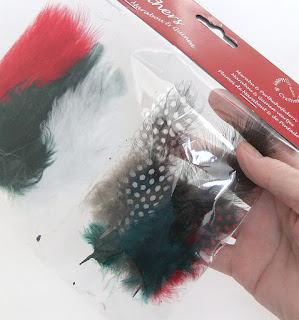 Have you guessed what I've been making yet? Because of the season, she's dressed for Mardi Gras! 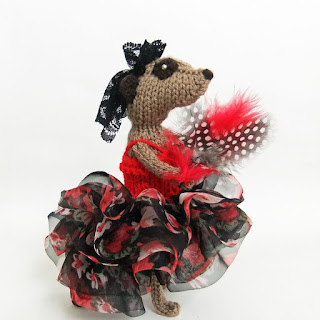 I wanted her ruffled skirt to be longer at the back so I cast on 7 stitches, knitted 4 rows and then cast on another 8 and carried on to the waist. Cutting the strip at that point I joined in my normal red yarn and just picked up the stitches by knitting into the holes as before, it made a seamless join which just needed the red end sewing off. I liked the ease of changing yarn, it means you can use the fancy expensive yarn in small amounts to jazz up an otherwise plain piece.

I tacked the edges of the chiffon together in a few laces to keep the meerkat's modesty but to be honest the ruffles blend in together very well.

I then picked out a few feathers, tacked them together and added a wire handle so she can hold her fan - she's good to go! Whether for Mardi Gras or for her weekly flamenco lesson, this is one jazzed up meerkat! If you fancy becoming her dancing partner you can buy her from my Etsy shop.

I still have a decent quantity of the fancy "yarn" and I'll show you the next project when I've figured out how to finish it. I'll also let you know about my third purchase from abakhan.

Posted by Heather Leavers at 10:40

She looks fabulous! I'm lucky enough to live close to a couple of Abakhan shops so I've seen the yarn in person, it fascinated me too, but I couldn't think what to do with it. This is a great idea!

Gorgeous! I love it.