I'd already noticed the Knit and Stitch TV ads because I watch TV whilst knitting, so I was very pleased to be asked to review the first two issues and eagerly awaited my parcel. In the interests of transparency I should point out I was given the issues free. 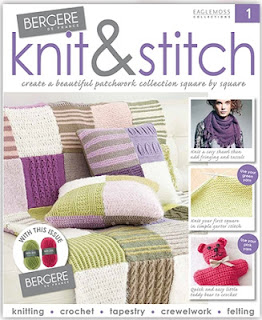 Knit and stitch is a weekly magazine which aims to teach knitting, crochet, crewel work, tapestry and felting. Each issue includes Bergere de France yarn, and each week there are instructions for a new square to add to your patchwork throw and cushion. There are also other patterns for accessories, clothing and toys and useful hints and tips. The first tapestry square is simple garter stitch but the picture on the cover shows other more complex designs as you week by week become more competent and confident.

I decided to focus on crochet as I am self-taught and have never yet followed a pattern: I'm a "pick up the hook and go" crocheter.

Issue 1 has a DVD which has taught me how to decrease more effectively (thank you!) though I would have liked the producer to leave off the background music. (Side note: for those of us used to youtube tutorials it's quite disconcerting in that the demonstrator is silent. The voice track is dubbed, presumably because it is available in other languages too.) There are also "know how" pages if you prefer to learn stitches and techniques from the printed page rather than a screen.

Also in issue 1: knitting patterns for a shawl and a child's sweater and a crewel work cushion.

Anyway - to work! I decided to crochet the teddy from the pattern in issue 1. Because I'm self-taught, and because I'd been crocheting quite some time before discovering that American and English crochet terms do not mean the same (!) I've never had any success with following crochet patterns. In this case though I had the know-how page and the DVD to keep me on track. Nonetheless I got confused regularly, and had to undo my work several times. 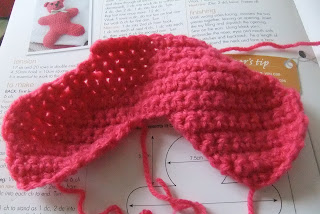 And that brings me to my first piece of advice:

Obviously it would matter if you were making a garment that needed to fit, but a teddy does not have to be exactly right. I wasn't happy with how the legs turned out, I thought they were a bit chunky - so rather than unpick him again, I decided that when I sewed him up, I'd adjust the width by tucking the edges in. Who's going to know? (Well, apart from you and MrNifty) 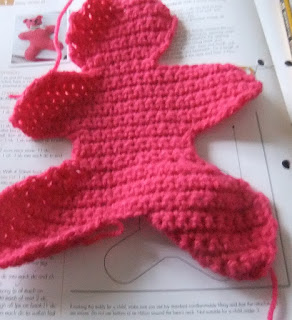 I also used the "wrong" size hook. The pattern specifies a 4.5mm hook but I used a 4mm because I already had one. That could well be why the legs were a bit chubby - but I refer you to advice #1 :-)

After my years of doing my own thing it wasn't really that likely that I'd sit down and meekly follow every instruction, was it?

The yarn provided wasn't quite sufficient for me, I was probably working to a different tension. Again, advice #1 came into play and I decided to use a lighter pink for the face so that I'd have plenty of the supplied pink for sewing up. I adapted the pattern to make a smaller head in light pink, then crocheted around the light pink face in dark pink for the sides of his head. As I reached the top of the head I discovered he wanted to be a rabbit after all, so added ears to the top of the head at the same time, meaning I didn't have to sew them on later (yay!)

I'm a big fan of avoiding sewing on, it's a potential area of weakness especially if you are making for a small person. For this reason, I suggest embroidering the features on the face BEFORE sewing the front and back together, this way you can tie off/sew in the ends much more securely. Similarly, when my rabbit demanded a fluffy tail, I crocheted it directly to his bottom rather than sew it on later. 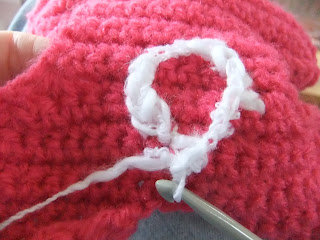 I hope this is helping you to see how you can take a published pattern as your starting point and make it your own?

I think he's rather lovely, and will be giving him away to one lucky reader - stop back tomorrow to hear about issue 2, see the bunny's face and find out how to enter! 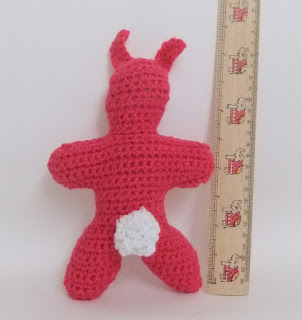 Posted by Heather Leavers at 09:52

haha, love your bunny-teddy-rabbit-bear, I've not seen the TV ads, so wasn't aware of the magazine. Ideal for beginners, I guess. I got stuck with trying to follow a pesky American pattern once, but I find now its easier to follow the diagrams rather than the words.
Joy xx

I have to say I have been sucked in to subscribing and have been left very disappointed thus far. My first eagerly awaited delivery was missing issue 2 and 3, and therefore crochet hook. Issues 4-7 came stuffed in a bag sans the free needles and any of the pomp associated with the on shelf issue 1. K&S haven't been very helpful in the matter.

That's a shame. Have you tried their facebook page? I think someone keeps track of what's posted on there. https://www.facebook.com/KnitandStitchCollection
I can't contact you direct as you are anonymous, hope you see this.