Birdwatching from the sofa!

We often go birdwatching on our walks, but since moving we've seen so many birds in our garden. 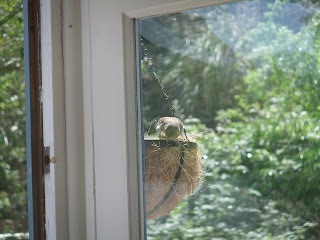 Today there was a greenfinch picking up nesting materials from the hanging basket directly outside the kitchen door. Fortunately he wasn't after the herb seedlings! 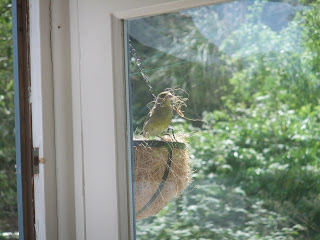 He came back several times, we're now the greenfinch equivalent of the local DIY store I think.

A few minutes later I spotted (pun intended!) a great spotted woodpecker in the birdbath. By the time I'd grabbed the camera he'd gone down to the grass. I included the first blurred photo because it shows (to me, anyway) that he was busily drilling away in the ground. 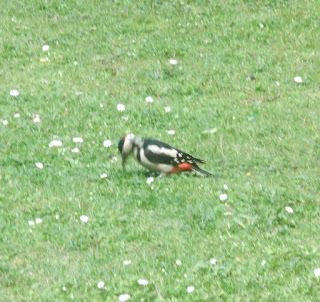 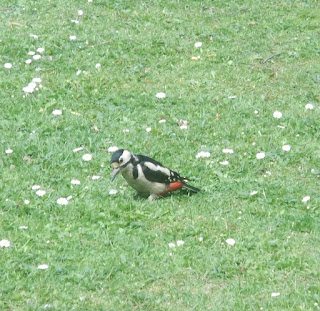 Look at that beak! 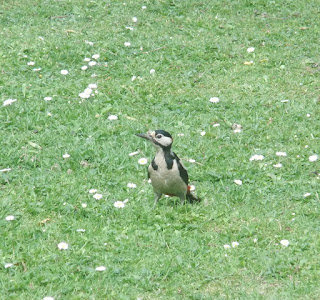 So beautiful. His (or her) mate was around too, but hid in a tree when I tried to get nearer outside.
These photos are all taken from indoors, through glass. 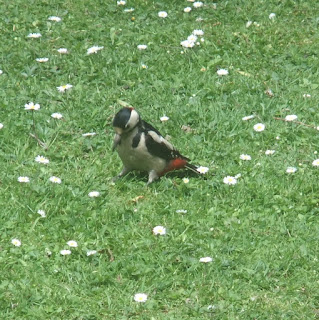 Posted by Heather Leavers at 14:01

We had a pair of woodpeckers (same type) bring their baby to our fat ball feeder last year, about this time, so keep your eyes peeled. Babies have a red top knot, I don't think adults do.

wow - the woodpecker pictures are amazing! We currently have a very cute (if not a little ugly) seagull chick on the roof opposite, it is great to see it walk about & stretch its wings.

Great pics of the woodpecker! Never saw one so pretty, or on the ground like that! Thanks for sharing! :)

I've never seen a woodpecker like that before, especially on the ground. Great pics!

Such a beautiful woodpecker, I've never seen one of that type. And the lucky greenfinch to be "given" all of that straw!
Peace, Judi

Funny, because I have a food blog, but I couldn't help but post all my pics of my Hawk family I have in my back yard. They were there all day long, after they first fledged, so close, and didn't care that we were right there outside next to them. They just recently left, and I miss seeing them all over the place. I couldn't help but love the name of your blog! Blessings, Judi! :) Dena