Our proposed house-move to the sea is *still* in the "proposed" stage, so we drove to Broomhill Sands today to walk by the sea. 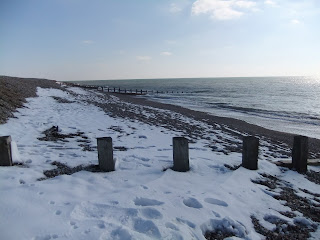 It was odd seeing snow on the beach, seashells just look WRONG in the snow! 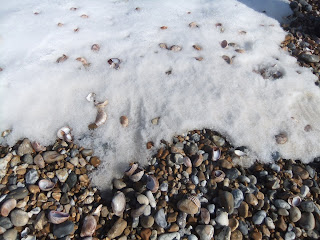 Weirdest of all was seeing the tideline in snow, in the next photo you can see the wavy line where the sea reached. I don't understand why the snow hasn't melted. The council puts salt and sand on the roads to clear the snow - and surely seawater is salty? Why hasn't it melted? Where's Professor Brian Cox when I need him to explain stuff? 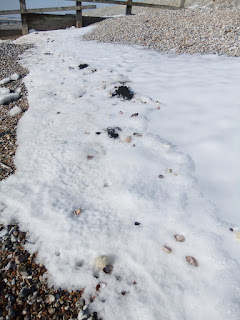 Posted by Heather Leavers at 14:46

Well now, how completely odd is that? LOL ... pretty pix tho. And yeah I would imagine seeing seashells in the snow is ... odd.

I'm not that sort of scientist but its probably just too cold. Even salt won't work if its too cold. Well thats my explanation and I'm sticking to it. X

I bow to your knowledge :-)

Well, that's snow, not seawater. Snow is freshwater (from the SKY, ack!!!!). If it were frozen seawater (which can happen but it would take much lower temperatures) it would be ice, not snow. How fast it melts will be a combination of the air temperature, wind (which add a wind chill factor), and the ground temperature. As this is by water I'm assuming the ground temperature will be colder than near buildings and inhabited areas? (where our heating would leak, and any underground structures would have different temperatures contributing to surface temp)

Think of licking an ice cube. Warmer tongue melts the surface, but not the whole ice cube. The warmth doesn't have time to reach more than the top layer, which does melt. If you were licking the ice cube in cold enough air, the melted surface of the licked ice would refreeze once your warm tongue moved away (like a wave).

oh that makes sense Tina, thank you! the surface of the snow which had been reached by the sea did look icy.

I think seashells look wonderfully LOVELY in the snow! :)