Every morning I can be spotted filling the birdfeeders - usually before my own breakfast. If I don't go out straight away the sparrows in the hedge get louder and louder, as if they're telling me off!

The sparrows are usually the first visitors, closely followed by the starlings who then squabble over the first baths of the day. 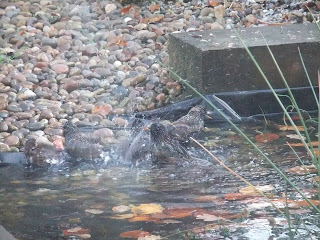 We also have a robin, a pair of ringed doves and a family of wood pigeons: they are ground feeders and rely on picking up the bits that the others knock down. A flock of 7 or 8 jackdaws turn up when they see the commotion. Until recently, they also fed from the ground. They're quite striking birds, with pale eyes and a grey neck. 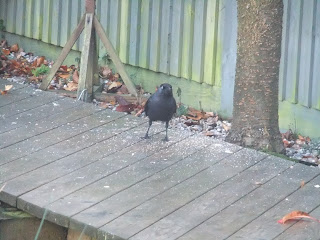 This one seemed to be wondering about the source of the "manna from heaven"... 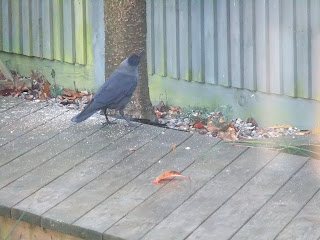 Then one morning, one of them decided they're not too big to go straight to the source, and we've now bought a stronger birdfeeder. The previous one has vanished altogether, whether they actually flew off with it I don't know - but it's not in the garden! 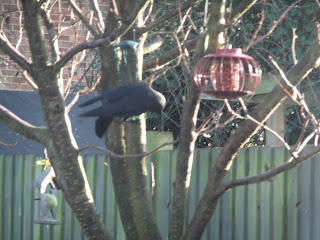 The bird feeders were originally intended for the resident families of blue tits and great tits, but they wait until the noisy early crowd have moved on and refuse to be photographed. This week we've seen our first pair of goldfinches, exquisite little birds that I really hope I can photograph. Do you feed the birds? Who is your favourite?
Posted by Heather Leavers at 12:01

great pictures! neat to have such a variety of birds.

i used to feed them but it gets to be a bit of a war out there when the big ones come. they overtake everything and spoil it for the others, and i think it annoys the neighbours :{
i think i will start again though. i love to see the little ones