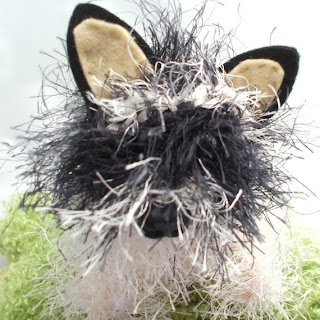 We're not known as dog-lovers, MrNifty and myself, but recently we've had a couple of close encounters!

On Monday in Herne Bay we were walking along the shore between house-viewings when we spotted someone/something swimming quite a way out, heading firmly diagonally away from the beach. As we got nearer we realised it was a dog, and a couple of young boys were calling to it. We didn't want to get involved - talking to kids who aren't your own isn't exactly popular these days.

We watched for a few minutes, then an old chap came along on a mobility scooter. He said the dog had been out there for half an hour or more. We asked the kids if they'd like us to ring the coastguard, or their parents, but they said the dog always comes back.

We walked on, turning back to look every now and then. Suddenly we heard the old man shouting at the kids that it was up to them, they had to go in the water to save the dog, it wouldn't last much longer - were they CHICKENS?

So we phoned the coastguards who said on no account let the children enter the water and that they'd be along.

We walked back, told them what we'd done - and then another family came along. In moments the father had stripped off and plunged into the water and swam out towards the dog...at which point his wife told us he was epileptic...

Fortunately it all ended happily, he caught up with the dog and turned it ashore, and then the coastguard arrived - but how badly could it have gone wrong?

The coastguard told us always always phone and report any similar situation - so I pass it on to you. In the UK dial 999 and ask for coastguard - let them decide what is necessary. They told us they've never lost a dog at sea yet, but they've lost several people who have attempted and failed to rescue dogs. 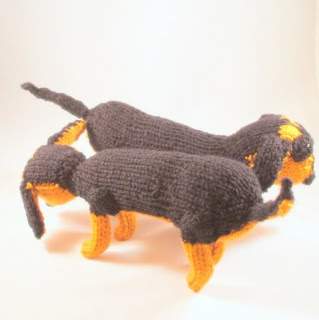 
Shaggy dog tale two was the very next day! We'd gone out walking locally, and almost immediately a dog started following us. It had a collar, but no contact details. Our planed route was through farm fields with sheep, so we tried to make it stay away. Someone in a garden said "Oh he's a nomad, he'll probably follow you, he's always out on his own"...and sure enough he did follow us, through several fields and finally on to a road which was supposed to take us home!

Fortunately, as we live in a farming area we soon found a piece of farming twine and made a lead, led the daft dog back to where we'd found it and this time we were able to give it the slip.

Email ThisBlogThis!Share to TwitterShare to FacebookShare to Pinterest
Labels: dogs

We had a hard day house-hunting yesterday, nothing much had gone right. We'd pre-booked 6 appointments, driven the hour or so to our potential new town and discovered 3 of the appointments had fallen through: someone had gone on holiday, one had sold, blah blah blah.

We managed to view a few more fortunately, but none seem as though they might be "the one".

One vendor was doing all she could to put us off...presumably it's her ex who is pushing for sale. Shades of Monty Python...
"Can we open the patio door?"
"It's broken"
"Is this an electric fire?"
"It's broken"
"What's this stain on the ceiling?"
"It's where the roof leaks"

Another property looked OK until we spotted the next-door neighbour with a queue of broken cars that he was doing up inches away from the house...noisily!

We had decided to eat in a wine bar we'd read good reviews for...guess what? It was closed.

So we thought we'd have fish and chips on the seafront...so it started to rain heavily! After fish and chips INSIDE, the rain eased off so we walked down the coast hoping for a decent sunset to finish the day on a good note. 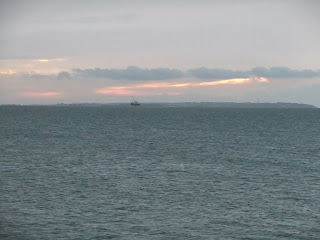 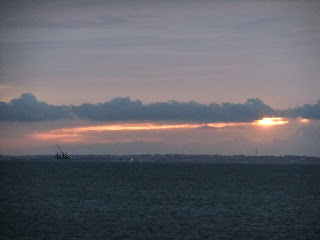 We started back towards the car, our backs now turned to the sunset. After a short while the light changed and we turned around... (you can enlarge the pics by clicking on them) 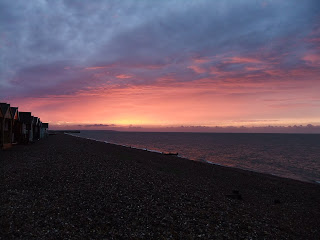 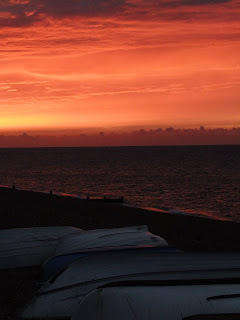 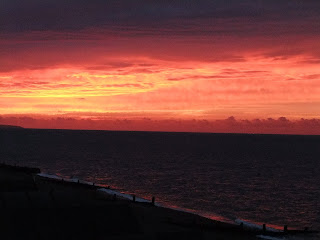 This last is my favourite, I love how the sun is reflected on the edges of the beach huts and path, showing the lines of perspective so clearly. 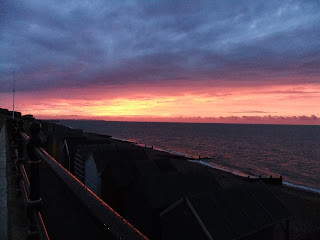 SO I guess the lesson for today is that it isn't over till it's over!

Star Trek and Monty Python in one, what's not to love?

One of the things I'll really miss when we move is our pond.

Today I watched snails swimming along the surface UPSIDE DOWN which is ridiculous. It looks like they're pulling themselves along just on the surface tension of the water. 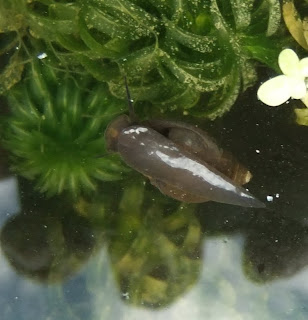 Next one isn't so nice - the water boatmen have been drowning tiny froglets and then snacking on them :-( MrNifty says it's nature's way but I prefer frogs to water boatmen. 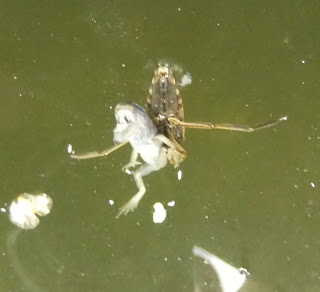 We have tiny baby newts! 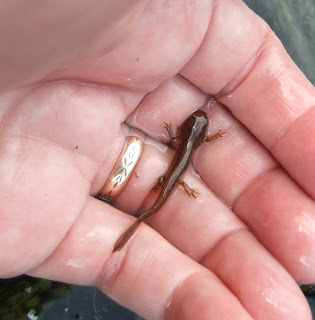 Don't know what this is, a larva of something or other, maybe a beetle? It's not a dragonfly or damselfly larva. It's wandering around with one end at the surface, breathing I assume. It's an inch or so long and I certainly didn't want it on my hand! 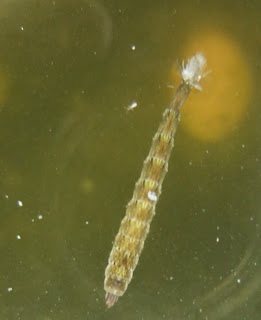 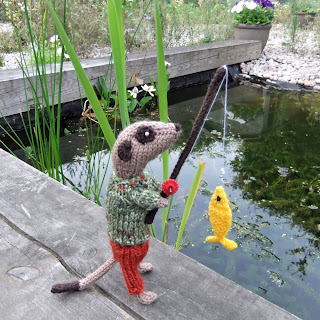 (thanks to xkcd.com for the image)

Folkestone Triennial: the making of my favourite piece!

I blogged last month about my stroll around Folkestone looking at the Triennial Art, and was later contacted with details of how the wonderful knitted wall came into being. Many thanks to Inferential Grin for permission to share their story and fabulous photos! I also got back on my favourite soapbox (What is Art?)...but more of that later!

The intention was to organise a community project that included rather than excluded the people of Folkestone and this was a beautiful project to launch. There were a few sleepless nights worrying about the amount of creations that would be received, but there were plenty from as far afield as Liverpool and France.

The knitted wall is actually two installations, "Flower Power" and "Sea Change". The slide show that follows has a *lot* of photos, but I found the process fascinating (and awe-inspiring!)

You may remember that part of my difficulty in deciding "What is Art?" is my feeling that to be "Art" rather than "craft" there needs to be a message - well, turns out this has not one but two!

Each flower, stem and leaf in "Flower Power" represents someone affected by domestic abuse in our communities.

'Sea Change' encourages us to look at the beauty of the place where we live.

There have been consequences! The Purl Queens have been invited to take part in yarn bombing for the Rugby World Cup which they have been busy making for, and a yarn shop in Canterbury have asked them to cover their building. It has been an extremely positive experience and has brought lots of people together in a lovely community way. We think Moda has become the most photographed building in Folkestone now and it makes us all very proud to be part of something beautiful.

This 'yarn bomb' is just one of many local artworks, made possible through the Fringe which is completely self funded. The exhibition continues through August and September (details on the website here) so if you're not too far from Folkestone, go go go!

Meanwhile...back to "What is Art?"

I apologised to Purl Queen for saying the knitted wall wasn't Art, explaining that I thought part of my reason was that I'm a knitter. So if *I* could knit flowers too - then it wasn't Art. With hindsight that sounds a bit like traditional British self-deprecation! More to come ... and I've changed my mind. How can a work of such beauty, skill and purpose *not* be Art?

I've been working on SEO - or trying to. My goodness it's boring. I did find one tool that made it more fun though - I used it ages ago but had forgotten all about wordle.

I'm hopingI'll be able to see if or how they differ for each of my shops. Here's my Etsy cloud (you can make the pictures bigger by clicking on them): 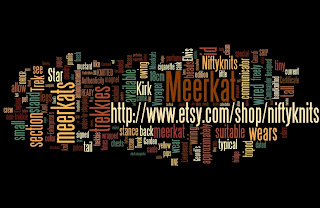 Some words are bigger: that's because I've used them more often. No surprise that "meerkat" figures loud and large, but I was surprised by "cigarette" and "perfume" top and centre. They've been picked up from my announcement that my knits will not smell of pets or tobacco or perfume. 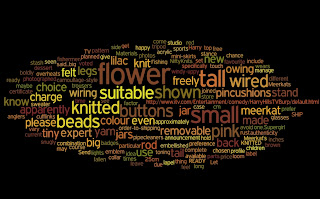 "Flower" is looming large because I've let my folksy shop dwindle rather, only 20 or so items here now - and it's favouring the flower pincushion, probably because I published free instructions. 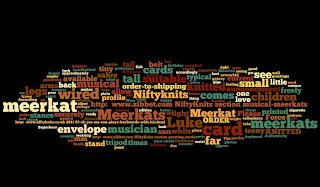 I suspect the Zibbet feed is working on different information, because it's showing my section names. I'm puzzled by "yarn-strain", bottom centre. What on earth was I talking about?

Make your own wordle here. In case you're wondering how I put pics of my wordles on here, I used "print screen" to turn them into jpg files.
Posted by Heather Leavers at 10:01 2 comments: