You can (in fact I insist!) click on each photo to enlarge it. Otherwise, basically, it's a lot of white and black birds with camouflaged chicks.

We went back to Rye Harbour Nature reserve to see if the chicks had hatched. Oh yes indeed they had - with a vengeance. My goodness they're noisy! 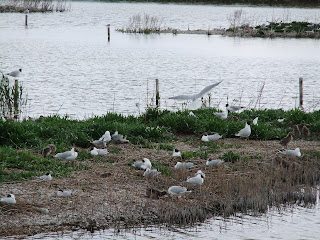 There was a constant coming and going of adult birds, fetching food. Each time a parent landed its chicks would surround the parent, chasing it round and round. Eventually the parent seemed to say "You kids are making me sick with all this chasing around" and then...yup, it'd throw up. And the kids would gulp down HUGE chunks of regurgitated food. Yum. The chick in the foreground of the picture above had herded its parent away from the other chicks so it got the whole meal. Resourceful - he'll go far!

The chick in the middle of the shot was jumping up and down flapping his pathetic little excuses for wings "Look mum, I'm flying!" 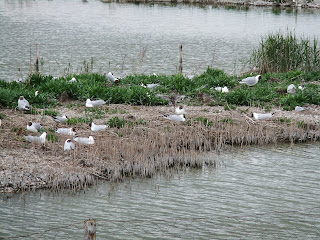 Can you see the three birds in the middle of the picture below? They're a different breed - and WE NOTICED! much slimmer, black cap instead of black head, red beaks - they're common terns, the others are black-headed gulls. *is birdspotter* 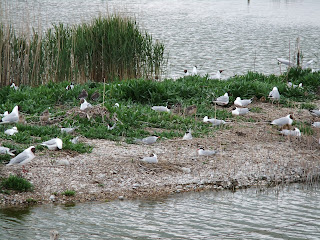 However - *is not **good** birdspotter* - don't know what this is, a duck of some sort I think, but he had a fine time trying to get this fish down his throat. Eyes bigger than beak. 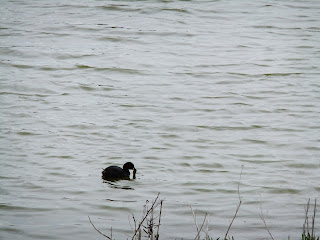 Posted by Heather Leavers at 12:58