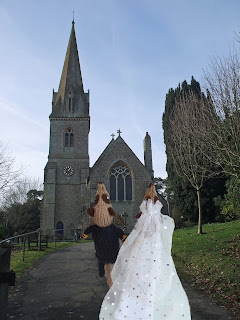 I don't know if you missed the news ;-) but Prince William is getting wed.

The Palace haven't released details of what anybody is wearing, and he has quite a few military uniforms to choose from.

HelloMagazine asked readers to vote, but I don't think they'll have the final say... 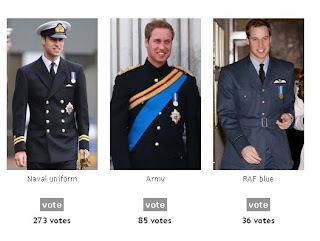 Deciding how to knit MeerkatKate was rather easier! She's wearing a stylish white off-the-shoulders dress which is much longer at the back, extending to a long train. She has a further train of sequined netting which is matched by her long veil. As these are hard times in the UK she has settled for a simple necklace of silver beads and a small posy of mixed wildflowers which she carries with her left hand in front to show off the engagement bling. 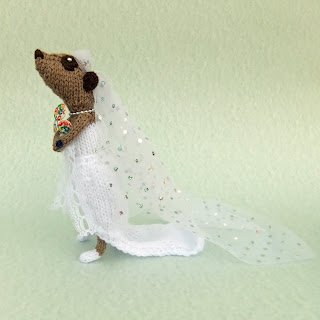 The Royal Meerkats are favouring the the Air Force uniform, with its longline belted tunic... 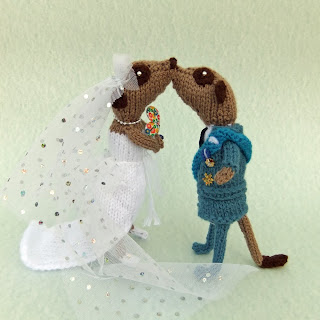 ...or maybe the Royal Navy? You'll note he isn't wearing the sash here - the butler had spent a long time shining up the double-breasted buttons and he promised not to cover them up. 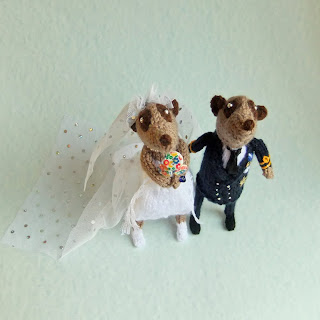 Available only at Zibbet at the moment (see more pics there) but will come to my Etsy and Folksy shops soon if you can wait!
Posted by Heather Leavers at 16:10

Fabulous, absolutely amazing ! I'm knitting a conventional ' Queen Elizabeth' and Corgis, not for sale I might add !
You will list them on Folksy I hope ? What a memento !

You and your adorable meerkats never cease to tickle my fancy and brighten my day! How sweet these two are, and how clever you are with all the costume details.

Another huge hit with the upcoming Royal wedding watchers!

Hugs from across the pond,

Just brilliant! You're so clever and the Royal Meerkats are fab.

Love a man in uniform...especially a Prince!

Have just noticed, in Navy uniform pic he looks remarkably like his father....

Even more so as a meerkat? Are you *the* Elizabeth? Elizabeth II? Can I have a blog badge "by royal appointment"? LOL

oh gosh so funny and cute! Love your imagination!

I actually married a man in uniform. So romantic, really! He really is my prince:)

Your work and creativity are awesome! 37 years ago I married the love of my life and he was wearing his AF uniform!

He should really wear the best dress of the unit he is currently serving under.
AAC all the way as our Harry knows.
;O)

Nice site, nice and easy on the eyes and great content too.