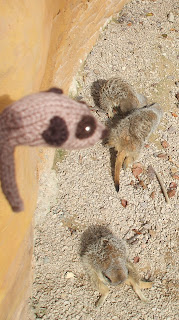 Yesterday we went to visit Ringo the meerkat at Whipsnade Zoo - he was adopted for me by my kids last Christmas. The zoo think it's best he stays there, although I'd have loved to bring him home! 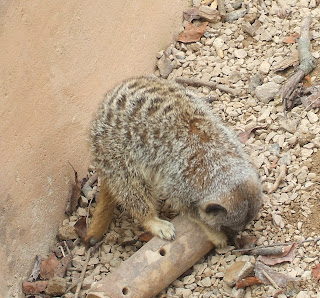 Ringo is easy to recognise because he has lost the dark tip from his tail. He shares his enclosure with his brothers John, George and Paul: so sadly, no babies :-(

One of the particular skills Meerkats show is sunbathing - they are professionals! 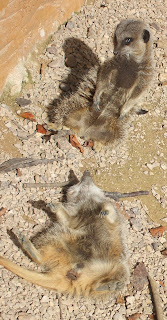 Meerkats forage whenever they're not sunbathing, their food is hidden all over the place for them. They are constantly chirruping to each other, just keeping in touch I suppose. Bit like twitter! 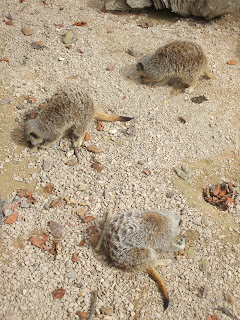 There's always someone on "guard duty" though. Poor things, there is a gliding club nearby so there are frequently gliders going overhead - and of course the meerkats think they might be predators! At such times their chirruping changes - they have different calls for "look out guys - aerial predator!" and "look out - ground predator!" (Apologies to Felix for not recording them) 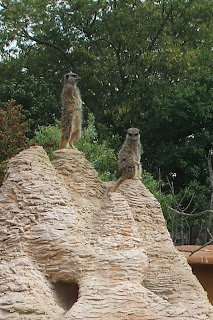 Eventually we tore ourselves away from the Kats...and found Mum and daughter hippo blowing bubbles! 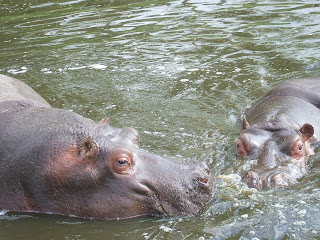 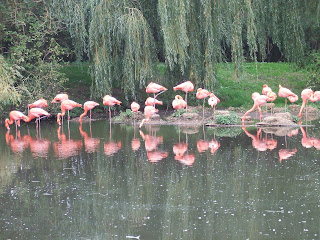 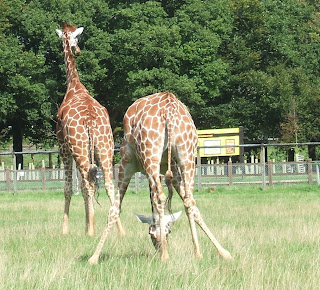 This was unexpected - a group of penguins found a feather and were clearly playing with it: 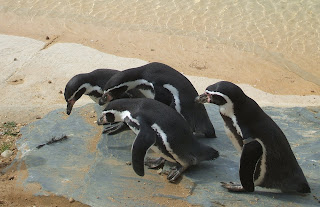 for all the world like a gang of kids playing keepy-uppy with a football! 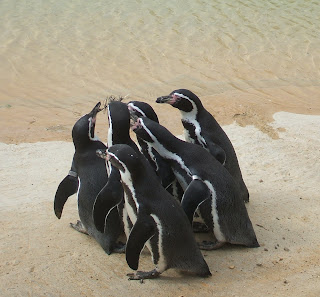 A highlight was seeing baby Ajang - he's less than 3 weeks old and gorgeous!

Finally - my friend Lorin had asked me (jokingly!) to bring her home a capybara so when I saw this in the carpark.... 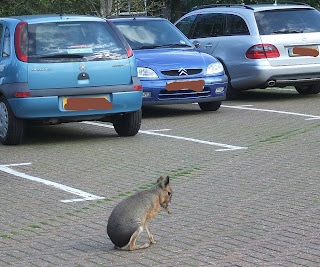 turns out it was a mara though, so I left it behind!

More pics tomorrow - I have a new contender for cutest-animal-in-the-world (sorry meerkats!)
Posted by Heather Leavers at 15:20

Fantastic pictures! I think I want a meerkat of my own. I wonder what the dog and cats would think of having one.

Haha, I'm picturing you hopping about the parking lot trying to capture that thing! The baby rhino was ADORABLE, I see he did gallop! Meerkats always look like they are smiling to me, such cute little things! :)

I LOVE meerkats...have ever since I saw them in the San Diego Zoo- twenty five ( eek) years ago. Thanks for sharing your wonderful day at the zoo with us!! Ringo is the cutest- your kids chose wisely :D

Its so funny that you're an expert on meerkats. I wonder how much wool you'd need to knit a hippo?

Thats Ok, you can pick me up a capy next time :-)!
the Mara is so wonderful! what an odd combination of bunny and antelope!

You just have to love those lemurs don't you? and the penguins...lol
@yellowbugboutique - I saw meerkats at San Diego too and loved them ever since - how could you not!