We were sad when the local auction house went out of business, and it's taken us a long time to find another one. Today was our first auction - and we won one of the two lots we wanted. 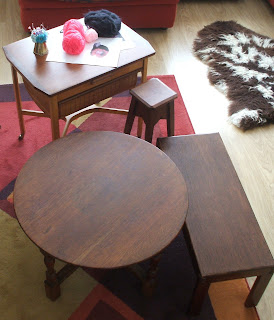 It was listed as a sewing basket, 2 occasional tables and a jardinierre. I only wanted the sewing basket, but as the whole set ended up being under £30 ($45) including buyer's commission I'm happy! 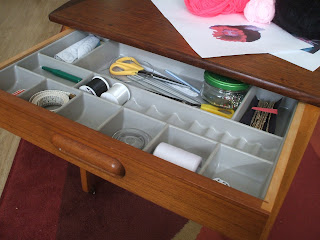 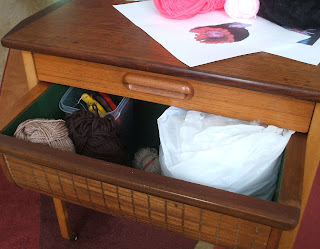 and then the deep drawer is lined in felt and is roomy enough for the day's knitting and yarn and stuffing and wires and everything else to be hidden away.

I am confident I'll be tidy for at least the next couple of days!

We missed the excitement of the early part of the auction. There was a box of Indian paintings, estimated at £10. Turned out 2 bidders knew more than the auctioneer and the owner. One of the painters was apparently a big name - and the lot fetched a staggering £8000. I've looked in my loft though ;-(
Posted by Heather Leavers at 15:46

Email ThisBlogThis!Share to TwitterShare to FacebookShare to Pinterest
Labels: auction

You are so lucky! These are wonderful finds! :)

Love your sewing table - very useful! What are you going to do with all the other tables though??!!!

I love auctions! congrats on winning some great finds :)