Our native British red squirrel has been wiped out of most of the UK by its big brash grey American cousin - but they have a stronghold on the Isle of Wight. Red squirrels are shy though, so even though we're supposed to have some in the garden here we weren't convinced - muttering away to each other as we walked down the drive "Huh, bet we'll never see one all week..Oh LOOK! There's one!"

Sure enough, there he was,scampering along a branch over our head. I took at least a dozen shots, this is the best one: 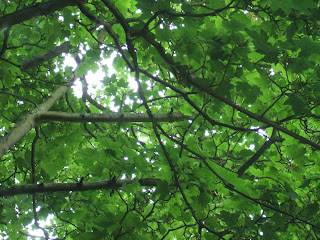 Can you see him? No? Me neither!

Better luck in the evening though. As we were walking back from the sea I grabbed MrNifty's arm and hissed "Stop, Look! There's a fox"

And sure enough a fox was reclining not toooo far from us in a field, enjoying the evening sun. As we looked, we realised there was a second..and a third...in fact, at least six! We've seen individual foxes many times at home, and even a mum and two cubs once (briefly!).

Again, I took LOADS of shots as we watched them...watching us. Came back to the cottage, put the camera's card in the laptop anxious to see our lovely foxes.

Nothing. The laptop insisted the card was unformatted and empty :-(

After the tiniest of NiftyKnit's tantrums MrNifty downloaded various freeware bits and pieces, but recovery wasn't possible without spending money, so the card is now reformatted and we'll have to go and see if they're back tonight. I hope so, but even without photos it was pretty magical!
Posted by Heather Leavers at 08:55

It's like a game of Spot The Ball, Nifty :D

LOL it really is!