Little Treasure in his journey to manhood

Time has come for little Treasure to leave his home-land, his safe haven under mom's guidance and support, and start his journey of self-exploration and growth on his way to become a self-assured and independent man.

And what better place to start than in Arosha's studio and home on the beautiful Carmel mountain in Haifa, Israel?

The guys introduced each other, and Treasure immediately adapted to the warm November sun, and together with Arosha spent his first afternoon lazing around, tanning and watching the view – While Arosha is gazing at the beach, little Treasure is trying to figure out what is going on 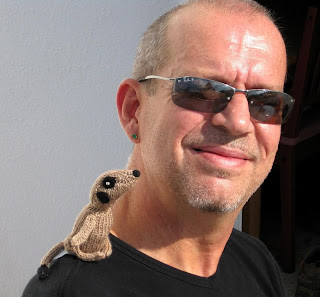 Things became even more intimate as Treasure wanted to get a better view of the passer-bys… (should we mention the girls in bikinis?) 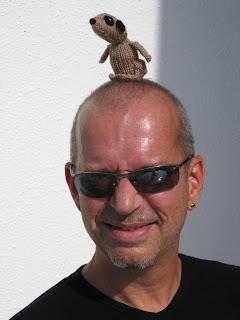 After a Falafel lunch break (Treasure found the balls to be a little too big for his size, and didn't care much for all the tahini that kept dripping), they went on to the main purpose of the visit - which was to teach Treasure a craft that he could develop into a profession.

Arosha was trying to explain his metal-working techniques: 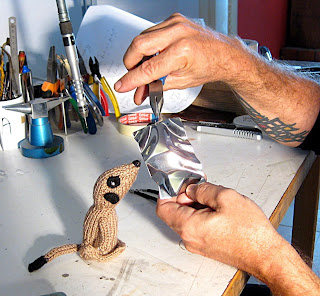 But Treasure lost his patience too soon, and started playing around with AroshaTwists plastic cuff bracelets: 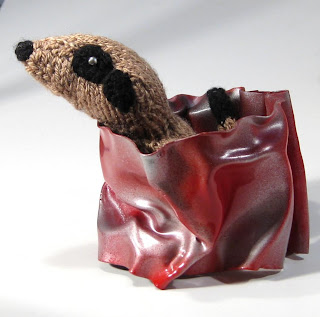 After an evening at the pub (pictures have been censored due to the misbehavior of both guys after their third beer), Arosha and Treasure bid farewell, and promised to meet again in a few years.

With much sadness, Treasure packed his stuff (which now includes an acorn from his previous visit and a plastic black and gold brooch which Arosha has given him with love), and left for his next visit on his world tour. 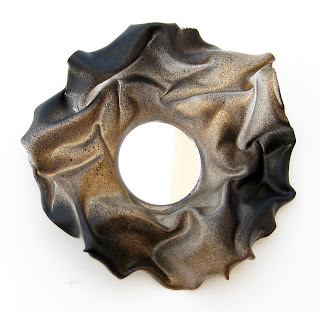 and of course, last but not least, the world tour facebook page.
Posted by Heather Leavers at 17:48

Aw, it's great to see little Treasure doing so well and I'm glad it arrived safe and well in Israel. :)

aw... well done treasure... so far for such a little meerkat! he's welcome at the seaside anytime... although we are fog bound tonight!

Lucky little meerkat - gets to meet Arosha in person, and enjoy the warm, sunny clime of Israel!
ByTheWay.etsy.com

Sounds like a good time was had by all. Treasure is growing up fast!

Looks like Treasure and Arosha had a great time together. Cute photos!

We had the best time together -
I'll miss the little fellow!!

oh wow, looks like he had alot of fun. Great pics, Arosha! Two really handsome guys...can't wait to see what is next on the agenda!

You are a hoot! Great pictures and a wonderful adventure for the little Treasure. Can't wait to see what is next on his itinerary!

Aw, so cute! The inquisitive meerkat expression--it's clear he's trying so hard to pay attention and learn from Arosha, before he gets a little distracted... :D

Haha!! What a great write up!!

Sounds like little Treasure id having a fantastic time!!

lol! He's adorable peeking out while playing in the cuff!

OMG so adorable! Love the pics! We need to see the pub photos.

Glad you two had a lovely visit. Can't wait to see where he ends up next.

How exciting!!! Thanks for the update on the big adventure!!!

WOW! Looks like Treasure had a great time! When's my turn to visit Arosha?

Arosha, you have killer tattoo!

Love to see the littele meerkat had a good time. Can't wait until he gets to Jerusalem, to absorb some holyness after all this beer and girls in bikinis.

Sprincolors I think you are right - Treasure now needs to be purified! ;-)

Is it wrong to be jealous of a furry little critter?!

Well, not for long my little pet - we're heading to Israel in December where I too will catch some of that sun (and hopefully a peek at the censored pub photos ;)

Care for a repeat performance in December, Arosha?

A fun day for meerkat and man.