A day (and a knight) in Egerton 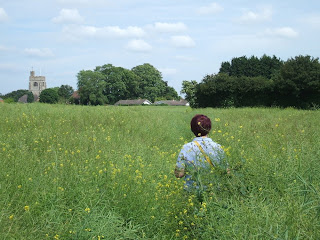 Wednesday's geocache outing took us 10 miles away to Egerton, starting at the church. The pathways were a little overgrown, as you see!

According to Geocacher Davjan the church tower was built by Sir John Darell of Calehill in 1476. Inside the church is an enormous brass chandelier. It is reputed to be the oldest 36-branch chandelier in the world and was made by Robert Rowland in 1699! 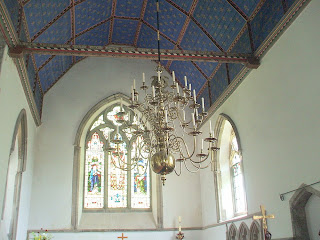 I was fascinated by John Darell, whose monument is in the church. 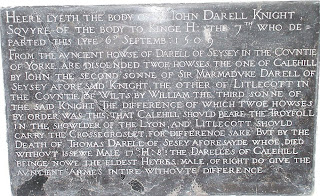 Under his feet is his dog and a crouching monk - I think this is a pardoner. Pardoners sold "indulgences" to rich people so they could go straight to Heaven without having to go to the bother of purgatory. 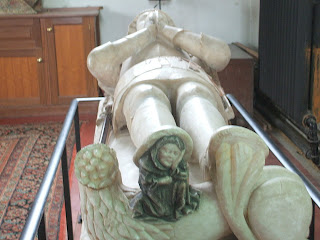 Instead of a pillow, his head rests on someone else's head - an enemy, perhaps? 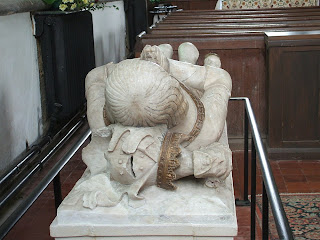 Our walk continued through beautiful countryside and no less than eight geocaches were discovered. 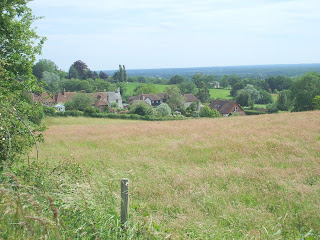 When we reached home, I googled John Darell. He certainly lived in interesting times!

"Sir John Darell, knt. of Calehill, who was so great a promoter of the Earl Of Richmond's interest, that King Richard III. declared him a rebel and a traitor, seized on all his lands in the counties of Kent and Worcester, (in which latter he had thirteen manors) and granted them to Sir William Harrington, knt. When the earl, however, ascended the throne, Sir John obtained a restitution of his possessions, and was appointed esquire of the body to the king, captain of the Lancers in Kent, and sheriff of the county. He espoused Anne, daughter of James Isaac, esq. of Bekes- borne, by whom he had issue: James, his successor; John, in holy orders, of Wittersham and Isabel." link

I even found his will.

I confess I don't understand all of it, but it is fascinating. I love that he paid for "an honest Englissh preest to syng and say masse for the helthe of my soule &e. for 5 yeres". Why 5 years? It seems so arbitrary. Did he think 5 years was about the right length of time to account for his various sins? 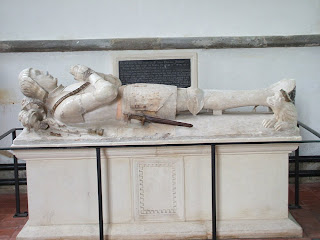 He leaves his tawny velvet gown to be made into a "cop" for the church - I wonder what that was? A vestment, a curtain?

The one person he does forget is his second son - the "spare". Younger sons went into the church, so he no longer has a claim on the estate.

Thanks Davjan!
Posted by Heather Leavers at 07:14

wow, i love the history of my ancestors homeland! Also explains the love of dogs in the UK that even back then they put a dog sculpture at his feet. I love these local history articles you write up. Gives me something to concentrate on while I think about which Trekkie Meerkat to get......

LOL thank you. I've a feeling having a dog at ones feet is symbolic of something - but I can't remember what.

What a wonderful post, I just love your blog!

I love your 'travelogues'...so interesting!

Thanks snap! that sounds right.

I'm staggered how much info arises from a casual wander inside a church.