Yarnbombing - heard of it?

I certainly hadn't, not until today's Telegraph (not my usual read I must add, I'd hate anyone to think I was a Tory) 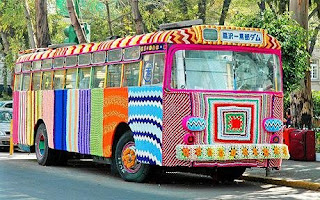 According to the article...Hundreds of knitters around the world have begun wrapping their huge woolly creations around public property like trees, street signs and lampposts.

They then take photos of their colourful "art" and post them on internet sites for fellow knitters to view and comment on.

One of the most ambitious pieces of work saw a woman spend an entire week covering a disused single decker bus in colourful swatches.

The phenomenon, called Yarnbombing, is thought to have originated in the US but knitters are now beginning to cover British streets in woollen 'tags'.

That's amazing. I'd buy that bus! lol So colorful. I'v never heard of that before.

this is fab! i love it

What a brilliant thing, I really hope it catches on here.

What a creative idea to do with excess yarn. My wiener dog says as long as wiener dogs are going to be on anyones yarnbombing hit list. She is good with it.

I should think there are quite a few pets who'd be eager to help, not to mention small children!

Wow this is awesome! Have linked to you in my post about Crayon art... :)

OK so with 4mm needles cast on how many stitches?

That's beautiful! I'm glad it's hitting Britain, it'd certainly cheer me up on a dark, wet and windy day!

This bus is amazing! I totally want to do this to our car!