just a quickie - the best email ever!

I've started knitting Morris Dancers, customising to particular teams (who tend to have rather unusual names).

I had the best request yesterday:

"Could you reserve a Loose Woman for me? I'd like a blonde."

Prize for the best response!!
Posted by Heather Leavers at 10:40 4 comments:

I've just heard of this site through Etsy forums, they give away a different piece of software every day - today's (21 hours left) is betterjpeg. Hopefully I will get better pics of my knits in future!

I can't wait to see what's on offer tomorrow!

I've been featured in a blog! Raven, of DirtyPrettyThings was in NaughtyKnits's latest treasury, and has kindly featured my shops in her blog.
Posted by Heather Leavers at 10:52 1 comment:

Look at my new banner!

The wonderful pennydogaccessories made me a new banner for my shop, and it's just occurred to me that I can put it up here too! Isn't it pretty? The photo, of course, shows the merest fraction of my yarn stash...and I naughtily bought 4 more balls today.


Well, they were calling to me.


And two of them were on special offer.


And then I bought some fabric to make a tablecover for the craft fair.

That'll be the craft fair that hasn't yet acknowledged whether I've got a table!!!!
Posted by Heather Leavers at 22:14 2 comments:

Poor blog, it's been neglected lately. Is it just me, or do all bloggers find it difficult to think of anything interesting to write about?

I've just been browsing Etsy forums, and have finally discovered what Etsy means - if you're as curious as I was, here's what Rokali said...

And the winner is...

Thanks to everyone who entered, your stories broght a smile to my face. Littleworm won for being even more evil as a mom than me!

I will place a reserved sign over your dinosaur littleworm - let me know if you've changed your mind since entering.
Posted by Heather Leavers at 20:26 3 comments:

As I was walking back from buying a paper this morning, an old man called out "You're cheerful, what's up? Won the lottery?"

It got me thinking - a year ago, he would probably have said "Cheer up, it might not happen" ... life has certainly improved for me this year.

So...what's that got to do with winning a prize? you're thinking, come on, get to the point!

Although I'm relieved to have left the stresses of teaching behind me, I really miss the children, so my competition is to leave me a funny child-centred story. Please don't switch off if you're not a parent - I'm fairly certain you were all children once!! The prize will be $10 to spend in either of my shops, and a condition of winning is that along with your funny story you say what you will chose to spend your $10 on, and why. I will choose the story that makes me fall off my chair :-D

I've just been introduced to a new toy by Katie...here it is, have a go!

Mine shows a distinct obsession with my son's band A Scandal in Bohemia, unless I'm much mistaken!
Posted by Heather Leavers at 12:14 No comments:

The great label sew-in has started!

No - not the back to school name tags (argh, seewing teensy tapes into sports socks) :-)

I've just received my parcel of specially designed labels to sew onto my knits from BellaMental
She was very patient with me, I had so many questions!! Now the great label retro-fit has started - so if you have a few spare hours, I've made a cake and put the kettle on! 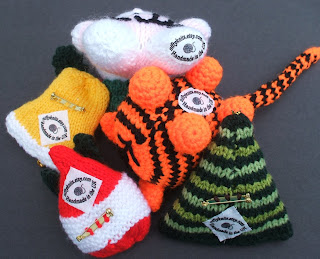 Posted by Heather Leavers at 11:41 No comments:

I was thinking of rearranging the sections in my etsy shop, when I noticed that my halloween section had 3 items..each at $6... eeek! 666, the mark of the beast! I must find something else to list in there, and quick!
Posted by Heather Leavers at 17:23 No comments:

So what's new in niftyworld?

Well - the big thing was going to Brighton Wednesday for my son's gig at the Komedia. His band A Scandal in Bohemia were (of course) brilliant - but I'm his mum so naturally biased. The audience seemed to agree with me!
You can buy his CD online at aScandalinBohemia.etsy.com
I was manning (womaning?) the merch stand at the gig cos the girl who was supposed to do it was unwell, which meant I got to meet two other bands - Junkboy and birdengine, check them out on myspace.

Which reminds me - apparently I signed up for myspace AGES ago and forgot all about it. must have been knittin ;-)

at the moment I'm busy trying to persuade it not to set me up on dates.

meanwhile - going back to the gig - I've been trying to remember which band I last saw live.

I've narrowed it down to three.

That's cos I've only ever seen three bands (well, I went to boarding school in the depths of the Dorset countryside, not that many bands played in Bournemouth in the early 70s!)

So - it was either Jethro Tull (Thick as a Brick), Emerson Lake and Palmer, or Yes.

Almost as good as Scandal :-)
Posted by Heather Leavers at 13:19 No comments: